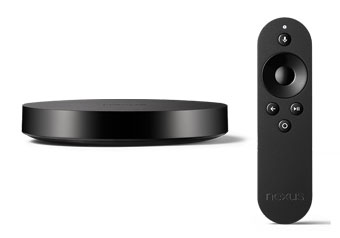 Note: in May of 2016, Google announced that the Nexus Player will be discontinued. Overall, it had a good run and, in many ways, paved the road for Android TV and Chromecast. Read on for our archived review…

As a global tech leader, Google has given users plenty to love. From Android phones you can root to your Chromebook to the incredible resolution of Google Maps, they continue to change the way we use technology. But for years, Google has attempted to make a splash in the at-home TV space (their first entry being the now defunct Google TV). Their latest foray and early success story (along with the Chromecast) is the Nexus Player by ASUS. The trademark black and round device was intended to take on Roku, Fire TV and a slew of other popular TV streaming units. Continue on to see how it stacks up…

First launched in 2014, the Nexus Player is a smart, all-inclusive product. With an excellent UI, design and performance profile, we’ve consistently rated it at or near the top of its class. But like any new tech it’s far from perfect. The voice search is simple and intuitive, much like the “OK, Google” you use on Android phones or tablets. The car-based interface is easy to use and has Chromecast-like features, so if you’re familiar with that you should easily take to the Nexus.

There is limited storage on the device and no Ethernet port either, which could be a drawback for folks who don’t like to use WiFi when streaming. But, overall, if you’re looking for a reliable and scalable streaming device that sits on your counter, you really can’t go wrong with the Nexus Player. Here’s a closer look at its key features:

Do you like hockey? Well, don’t mistake the Nexus Player for a puck because that’ll cost you $100 to replace. The design is simple enough. It’s round and flat – much like a Roomba – and doesn’t take up much space wherever you put it. You can hide it if you want because the remote uses Bluetooth in lieu of an infrared sensor, so you won’t need a direct line of sight.

On its belly you’ll find a power LED indicator, sync option and three ports: HDMI, power and USB (micro). It would be great to see an Ethernet port on there, but without one, you are stuck relying strictly on WiFi. It also lacks an optical port (which a lot of people don’t use anyway) and another HDMI port. Both Apple TV and Amazon Fire TV do support optical audio-out, so we hope to see this with the Nexus’ next model.

Like many streaming devices, the interface on the Player is sleek, well-engineered, and easy to navigate.

There are four basic rows when you start up: settings, installed apps, recommended video and games. The box-style apps resemble that of Windows 8 – they aren’t cluttered and definitely large enough to read. The “recommended” area determines its results based on your viewing history, much like Netflix. Of course it’s not 100% accurate, but it’s handy especially if there’s new content you didn’t know about.

Voice search gives you the option to find something that isn’t directly on the screen and unlike other systems, this one works almost 100% of the time. Search, for the time being, is restricted to YouTube and the Google Play Store…which means if you search for something on Netflix, isn’t not going to appear. It’s not a huge setback, but it seems odd that Google wouldn’t make this standard amongst all of the device’s apps. Switching between movies and apps is incredibly quick and takes the wait time out of transitioning.

The system comes with a controller that feels and looks like a XBOX controller and a standard remote. There isn’t anything special about the remote: it has home, back and play/pause buttons, plus the back and search keys as well. Google includes the controller because they want to be your entry-level gaming machine. Like any controller on the Playstation or Xbox, buttons work fine and it’s easy to use. Triggers also feel good as well.

Google has added a lot of games since the Player’s origin. You have access to games like Asphalt 8, Radiant, Badland, and others. It could use more to make it a more viable gaming option, so hopefully they bring many of the Play store games to the Nexus Player.

The Player is a simple device but offers an impressive speed profile, especially when stacked up against other products. It isn’t a computer by any means, but like we said earlier, swapping between apps is seamless and the quad-core processor lets you play 3D games without any issues.

The big drawback is the 1GB of memory is less than almost any smartphone. If Google really wants you to use this as a gaming device, they are going to have to spice things up a bit. More memory isn’t that much more money and they should still be able to keep the device under $125. There is 8GB of storage as well, which won’t fill up that quickly considering how few gaming and other apps you can put on the Player.

Other specs include dual-band WiFi, Bluetooth 4.0, a 1.8Ghz processor, and Android 5.0 (Lollipop).

If all you want is a device that streams, the Nexus Player may be too much for you. If you’re looking to add a little bit extra such as gaming and a near-perfect voice search option, this could be your device. Both Sony and Sharp have already signed on to make Android TV their smart platform, so it’s obvious the Nexus Player and Google have made a step in the right direction.

The layout is simple and easy to navigate. Content and image stand out and are big enough to read. They have added more apps to the system, both games and video, making it easier than ever to really enjoy your entertainment. It isn’t without it’s flaws, though. There is no Ethernet port or extra HDMI port, both the memory and internal storage can be too small for some, and it’s missing optical out.

Overall, as a media streaming device and gaming tool, we rate the Google Nexus Player a 4.9 out of 5 and expect big things in the future.